Wes Burger is opening soon in the Mission in San Francisco. In the meantime, Wes Rowe is showcasing his formidable burgering skills at a pop-up every Wednesday night. The pop-up is at Mojo Bicycle Club on Divisadero. Wes takes over the cafe and cranks out a different burger and version of tots every week.

Before the burger came out we were treated to his weekly tot construction. Dubbed Irish Poutine ($8), the piping hot tots were topped off with shredded cheddar, bacon and a curry sauce, a crazy combination that worked. I stopped myself from eating too much and ruining my appetite. 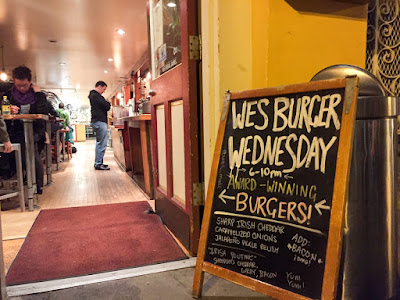 The burger arrived to a hearty “Scott!” from chef Wes. We picked it up and headed back to our table by the window on busy Divisidero. One bite and I was on the WesBurger team. The patty has plenty of fat and taste despite my concerns about low fat content from the brisket. Wes told me that he leaves enough of the brisket fat to get it where it needs to be. The Coarse grind allows the fat to melt down through the patty. Bacon was not crisp but very flavorful. The pickle relish was not overly spicy, making a sweet and acidic compliment to the sharp cheddar.

Beverage note: Wine and beer from the Bicycle club were a nice bonus with the burger.

WesBurger opens on Mission near 18th sometime in March, they will have 3 or 4 burgers on the menu and a nightly special. Chef Wes is using the pop-up to gauge the favorites. I might have to check back on another Wednesday and place a vote.

Burger 5 spatulas out of 5
Poutine 4 spatulas

must say you had done a tremendous job,I appreciate all your efforts.Thanks alot for your writings......Waiting for a new 1..
Packers And Movers Delhi

very good post which I really enjoy reading. It is not every day that I have the possibility to see something like this.
Packers and Movers Mumbai

movers and packers in pune said...

The information is very useful and interesting. Thanks for sharing and do not forget to visit our website

Packers and movers in wakad said...

Its really amazing blog with very much helpful information, thank you so much for writing this great blog here for us.

The article you have shared here is awesome. I really like and appreciate your work. The points you have mentioned in this article are useful.

packers and movers in dadar said...

packers and movers in Mumbai said...

must say that overall I am really impressed with this blog. It is easy to see that you are passionate about your writing. If only I had your writing ability I look forward to more updates and will be returning.

Thanks for this articles. You have provided nice information.

Thank you for your post quality articles and may be useful for many people.

I really like your blog. You have a sense of humor and very informative article. Thank you for sharing. Keep up the good work.

Great..!!thanks for sharing with us.
Shipping Company in India

The article was very nice and very interesting to read. Thank you for sharing the information

We are at, The Functions Empire known for the best quality services. we are wedding planner and event organisers in delhi NCR Best Event Management Company In Delhi NCR

Packers and movers in Kolkata said...

Luckily, Pune has an incredible history of treating its visitor with the best administrations. The Pune escorts are a quiet yet significant piece of this custom.
Pune escorts

Bharat CSP Agents are those individuals who acts as an agent of the bank at places where it is not possible to open branch of the bank.

We have worked with many businesses in New Zealand and abroad and we have found that although there has been massive growth in technology, most small to medium sized business owners have been left behind.

Oxigen BC Private Limited Company is India's Largest CSP Provider, which works in all the states of India to open customer service point of all banks. Such as - sbi, boi, bob, pnb etc.

A large number of people, particularly the migrant laborers and factory workers do not have a saving account and even not able to open an account due to lack of valid address and ID proof. As a result they face difficulties to save their earnings in a safe place and look out for solution to send money to their families.

Really a vry nice blog i really appreciate all your efforts ,thank you so mch for sharing this valuable information with all of us .
Local Packers And Movers Bangalore

Thanks for sharing this information & Nice Blog..

We have worked with many businesses in New Zealand and abroad and we have found that although there has been massive growth in technology, most small to medium sized business owners have been left behind.

Oxigen BC Private Limited Company is India's Largest CSP Provider, which works in all the states of India to open customer service point of all banks. Such as - sbi, boi, bob, pnb etc.

Kiosk Banking BC model aims to provide a real time, user-friendly banking services to the consumer in their neighborhood. Bank Mitra has been a National ‘Business Correspondent’ for the SBI, PNB, Bank of Baroda, Bank of India, Central bank, Canara Bank, Allahabad Bank, Union Bank, Axis and ICICI Bank .

LeptoConnect is a supplement that is mainly concerned in burning unwanted fats so as to give you faster weight-loss results. The stored fats are its main target and its makers were applauded because of this good objective. The best way to fight weight-gain is to prevent the growth of unwanted substances that contributes great in gaining more pounds.
LeptoConnect Reviews

Shipox is a complete delivery software solution for pickup and delivery.

It's an art of shaping your dreams into an authoritative design or website that will serve as a bridge between your business objectives and your target audience.

Enjoyed reading the article above , really explains everything in detail,the article is very interesting and effective.Thank you and good luck for the upcoming article @ Packers And Movers Hyderabad

My Oxigen csp Agents are those individuals who acts as an agent of the bank at places where it is not possible to open branch of the bank.

A large bouquet of services is integrated into a single transaction & payment processing platform, including Prepaid, Postpaid & Subscription based services like Mobile Money Transfer, Recharges, Bill Payments, Ticketing and Subscriptions for all leading service providers across industries.