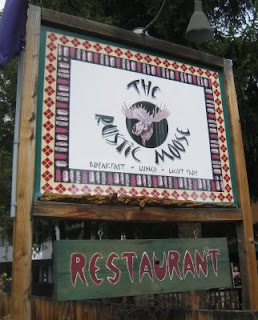 The Rustic Moose in Ketchum, Idaho has been a family favorite for many years. We have been traveling to Sun Valley every summer since 1993. The Rustic Moose sprung up several years ago when its predecessor restaurant the Buffalo Grill shut down. In fact, old favorites like Buffalo Chips, a potatoes, bacon and cheese dish and the Buffalo Burger are still on the menu.

We happened to visit during Wagon Days. A festival in Ketchum that has a parade celebrating the area’s mining and cowboy roots. The parade has no motorized vehicles. It includes lots of old stagecoaches, the Budweiser Clydesdales and a massive chain of ore wagons pulled by some 20 mules. The parade was passing by while we ate. We had the usually crowded Rustic Moose to ourselves because no one could park in the blocked-off roads near the restaurant.

It turns out the Buffalo Burger ($14.25) is in fact a hamburger made from 1/3 pound of fresh ground beef, not buffalo. I ordered it up along with fries and onion rings that come along. The burger sits on a wonderfully fresh and springy bun. The outside is crunchy and the inside is grilled. There is a tangy aioli sauce, avocado, pepper jack cheese, lettuce, tomato and red onions as well. The beef is fresh and good, but really is just a small note in the wonderful symphony of tastes. It is a very unique burger that I highly recommend. 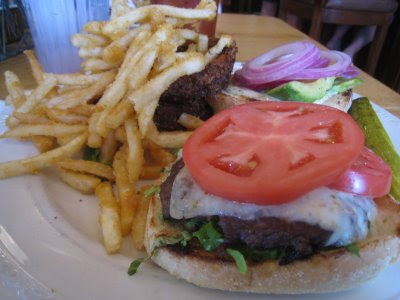 The fries were thin cut, coated and very tasty for coated fries. The onion rings are thickly breaded in a peppery crunch and cooked very dark. The coating somewhat overwhelms the thick onion inside.

After eating we all retired outside to the sidewalk to watch the end of the parade. Against a backdrop of Bald Mountain and partly cloudy skies, buggies and horses flowed by. We sat across from a small announcer stand where two, half-drunk urban cowgirls narrated the parade telling us about the spotted ass ranch entry and how mules were smarter than most of their ex-husbands. Sun Valley is a lovely, quirky place and that and the Rustic Moose are two of the reasons we love it. 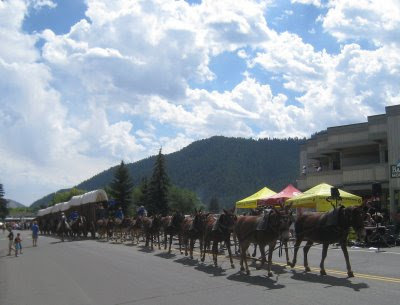 Pie ‘n Burger in Pasadena was recently voted best pie in L.A. We had also read the burger was very good as well. On our way out of L.A. my wife Pat and I swung through Pasadena to check it out. 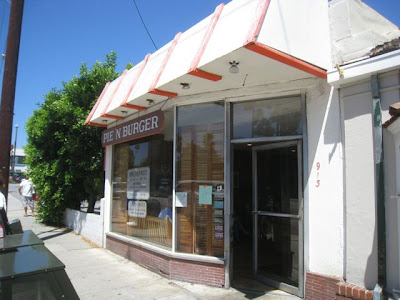 Pie ‘n Burger’s interior is like a museum piece. Faux wood formica counter is the original from the restaurant opening in 1963. There were Oak chairs like those in my house when I was a kid, we. The current owner ate there as a kid and started working at Pie 'n Burger when he was a USC student in 1972. He never left. He has kept much of the original staff and the menu has barely changed.

When we walked in the U.S. Olympic basketball team was on the TV. I had to check that it wasn’t a game from the 70s when the U.S. was dominant in basketball. All the tables where packed, so we sat at the counter which wound around the grill. 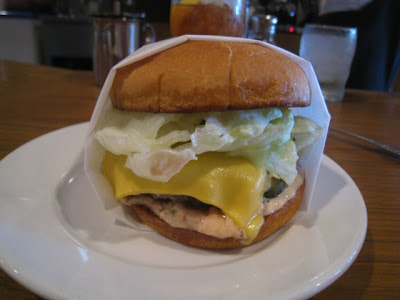 We each ordered a Cheeseburger ($6.50), fries ($3.55), pecan pie ($3.65) and peach pie ($4.25). The burgers were 4 ounces of fresh beef, griddled with melted American cheese. They came with iceberg lettuce, crisp pickle chips and thousand-island dressing. The bun was crisply grilled on the griddle. This is a classic burger. Kind of like a big version of In-N-Out. Pat’s was plain. We both really liked our burgers.

The fries were medium cut, no skins form frozen potatoes. They were hot and salted perfectly. Very good.

I also liked the pecan pie. As I ate it, I was transported back to the 70s. Eating my grandmas pecan pie while watching the U.S. stomp the field in Olympic basketball on the Zenith console TV. 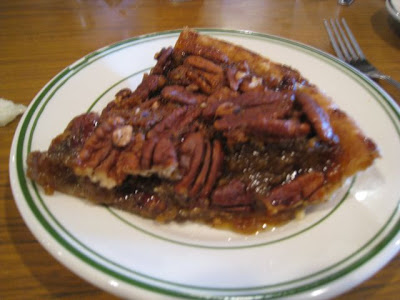 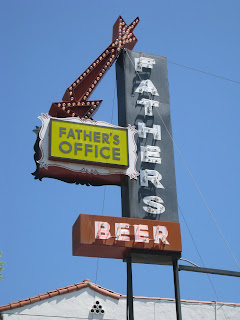 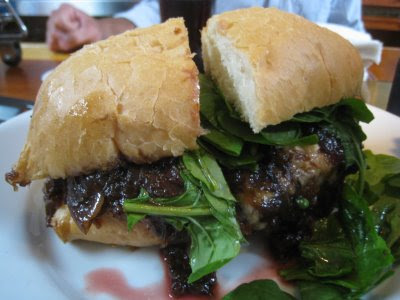 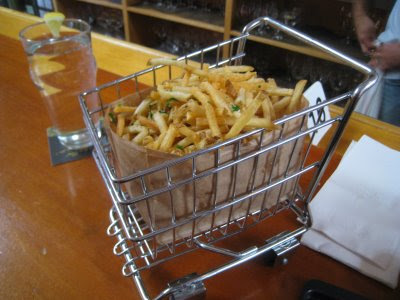 Ford's Filling Station in Culver City was a back up choice when we discovered that Father's Office wasn't open during the week for lunch. It was a happy backup. We arrived early and got a great seat outside in the shade. Our table overlooked the Culver City Blvd. as the lunch crowd descended from the nearby studios.

I ordered a Pub Burger with Onion Rings ($16). The onion rings were lovely, large and crunchy. Made from red onions and beer-battered, they were very good. 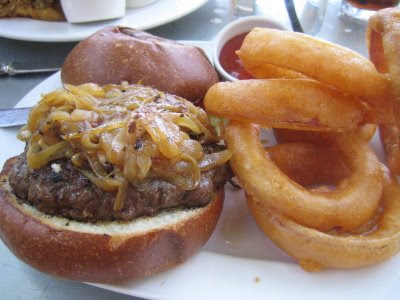 The burger was also a treat. A half-pound patty, hand-ground on site from organic beef, it was very tasty indeed. It was prepared to a perfect medium. The grilled, sweet onions blended nicely with the blue cheese. Everything sat on an egg bun with onions baked in the top.

My wife Pat had read that the locals loved the burger and I can see why it was true. A definite winner.

Apple Pan in Los Angeles is a well-known and long-standing burger institution. Pat, my wife, had read about it as a rival with Father's Office for the premier burger in L.A. Pat and I hoofed it over from our hotel in Westwood about two miles to Pico Blvd. Who says nobody walks in L.A.? 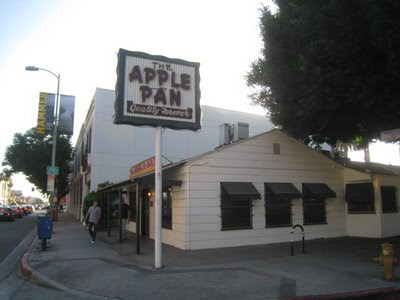 The place is nothing if not authentic. I mean, the chairs, the floor, the doors, even our waiter who had worked there 44 years was original material. I was licking my chops to try the Hickory Burger ($5.50), a recipe purported on the menu to be from 1945. We also ordered the French Fries ($2.45) and Pat had a Combination, ham and cheese, ($7.50) sandwich.

The fries and ham sandwich came out to the counter almost immediately. When my burger came out a few seconds later, it was placed in my hand by the cook, wrapped neatly in white paper. 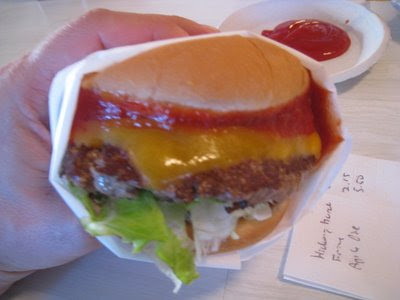 The burger was obviously hot. It had a little more lettuce on it than I like. The quarter-pound patty was nicely cooked and did its best to stand out against the mayo, hickory sauce. There were also pickle chips. The white bun was nicely grilled. But the whole thing wasn't that impressive to me. Except for the hickory sauce which was basically smokey ketchup, it wasn't that unique. 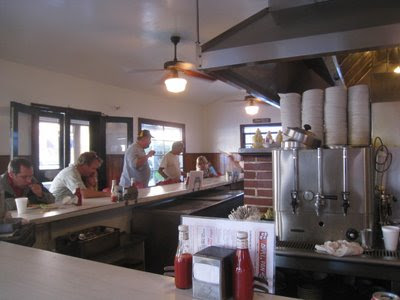 The fries were hot and thin. A little greasy but crisp. Also not spectacular. Pat liked her ham sandwich which was piled high with ham they make right there.

We had to try some apple pie ($5.50) which our waiter nicely split for us on two plates. I liked it, Pat was indifferent.

I really wanted to fall in love with the charming little relic of a restaurant, but in the end, I found the burger to be good, not great. The restaurant itself though, is worth a visit and is a lot of fun.

Burger 3.5 spatulas out of 5
Fries 3 spatulas