Nick’s English Hut in Bloomington Indiana, is not a bad place despite being in the shadow of the enemy. I flew to Indiana to meet some high school buddies near Indiana University. Having been a Purdue Boilermaker, IU’s bitter, instate rival, I had never spent much time in Bloomington.

We went to Nick’s an hour or two before an IU basketball game was to be broadcast. My buddies wanted to get there early to guarantee a good seat. The vast space was mostly empty when we got there. I attribute this to the fact that IU was 1-14 in Big Ten play at that point. (Author’s note: Purdue was 10-5 and in the process of winning number 11 when we arrived.)

Nick’s is huge. The original downstairs is a charming and dark with a double row of wood booths and more seating in back. We went upstairs to the newer large upstairs space, which had a little less soul, but more than made up for it with lot’s of big screens to watch the game. We grabbed a table, six stools and several brews. 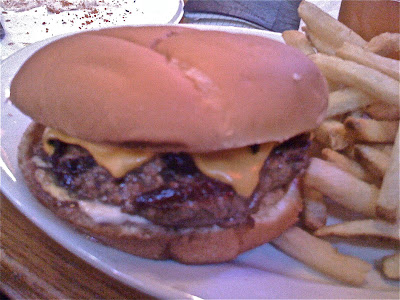 I ordered the 1/3-pound Bacon Cheeseburger with fries ($8.50). The Bleu burger was recommended, but I like to go with a milder cheese so I can taste the beef. I also, ordered onion rings ($3.50 for a half order.) There were lots of other tempting appetizer items on the menu like Breaded Mushrooms and Sink-The-Bismarck Fries ($6.50 with cheese). These are a bucket of fries all spiced up with chili powder and Parmesan cheese and accompanied by a spicy kind of thousand-island type dressing. I highly recommend these over the regular fries. They are unique and very tasty. They go great with beer.

The onion rings came with the Bismarcks and mushrooms. They were battered and large and pretty good, although not that unique. The mushrooms were more interesting. They were a very large chunk of portobello, battered and hot, but crunchy on the outside.

The burger came and looked very nice sitting on a fresh white Kaiser bun. The American cheese was melted enticingly and covered with bits of bacon that were crunchy and salty. A nice touch I had not had before. I had mustard and mayo on the sandwich as well. Biting in, I found the whole thing very pleasing. It was a bit smokier than I like, but the beef was juicy and cooked a nice medium. I had a bite of the bleu burger and didn’t think it was quite as good with too much bleu cheese for my taste.

But the real treat of the evening was the breaded tenderloin sandwich. (See photo below.) This is an Indiana favorite. A pork tenderloin is pounded thin and then breaded and deep-fried. A perfect version is much larger than the bun and this one was very, very good with fresh lettuce and onions too. Don’t miss this treat if you go to Nick’s. 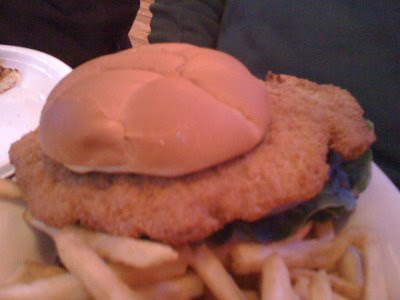 Another great meal I had in Bloomington was breakfast at the Runcible Spoon. They have a unique version of Eggs Benedict, but the real find is the superb corned beef hash. This hash mixed mashed potatoes and corned beef fried up in a skillet. Put a runny egg over it and you are half way to heaven. Have the burger at Nick’s in the afternoon and complete the trip.

Of course, then you remember you are in IU territory and cannot possibly be in heaven. That is, until IU loses at the buzzer. Then order is restored.

(One more tip: Stay away from Opie Taylor’s. My burger there was severely overcooked and inferior in every way to Nick’s a few blocks away.)

This looks awesome Scott. Great review and those fries sound good too.

I went to IU and never had the burger at Nick's. It will be my first stop next time I get back to Bloomington.

Get the tenderloin too! It was awesome.

Definitely going to check these out! Haven't been on the site in forever, but logged on to my dad's page and saw you're link. Obviously has to come check out the Bloomington Review! :-)

Thanks Alex. Keep me updated on the happenings in Bloomington.

Update: Finally 21, and finally legal to enjoy Nick's as it should be. It's now one of my favorite spots for both drinking and dinner... and the Sink the Biz fries are MY FAVORITE! I can't wait until you all make your way back here again so I can actually come hang out this time :-P I have yet to try a cheeseburger here though, but I think we're going tonight, so I'll definitely have to try that!!!

Hi there, I justwanted to say you should try the Tenderloin at Pawn Shop Pub in Indianapolis. I've had the Nick's tenderloin which is very good but I actually think the one at the Pawn Shop Pub is a bit tastier. It tastes like it is homemade from your grandmas kitchen.Very juicy and and the breading is very unique.