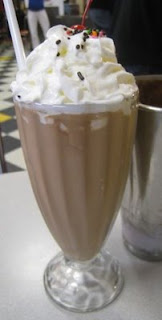 Peggy Sue’s Restaurant in San Jose is a 50’s diner-style restaurant in downtown San Jose. I had a break from watching my daughter’s volleyball tournament at the nearby convention center. So I walked over in the rain and entered a packed restaurant. A line of volleyball players, fifteen-deep waited at the order counter.

I took my seat at one of the few unoccupied laminate tables sitting on the clean black and white tile floor. Posters, photos and articles from the 50’s adorned the walls. My number was called and I retrieved my food.

The shake was thick and creamy, and nicely presented with whip cream topped with sprinkles and a cherry. There was way too much peanut butter, in the mix, overwhelming the chocolate. 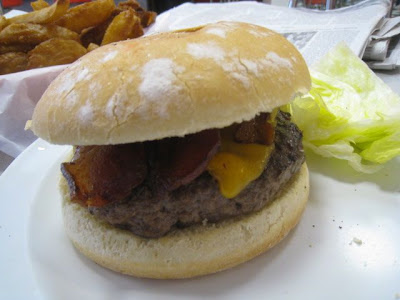 The burger looked good. The bun looked right out of the bakery, but it was not toasted. Although the patty was cooked medium, the meat was not juicy. The bacon was not that crisp and the burger wasn’t that hot. Overall, it was pretty average.

The fries were medium cut but, equally unremarkable. The onion rings were medium thick and battered, but not crisp. 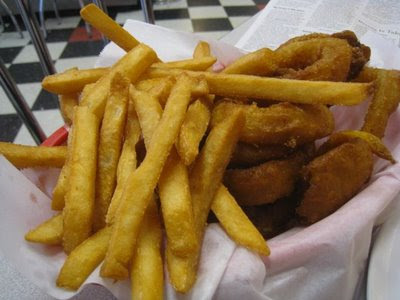 As I walked out I noticed a sign on the front that said “Best Burger Silicon Valley 2004, Wave Magazine Readers Choice.” Either that means Silicon Valley readers didn’t try many burgers or Peggy Sue’s has lost some quality since 2004.