Ford’s Real Hamburgers is Sacramento has the look of an old ice cream stand. It is pretty seedy looking when you pull up, giving one pause to eat there. But the place was very busy mid-afternoon one Sunday, so I went ahead and gave it a shot.

I placed my order at the window, which is inside an area that was probably once outdoors under an awning, but has now been glassed in. I ordered the 1/2-pound burger with bacon and American cheese ($10.51), eschewing the tomato and lettuce when asked. I also ordered the onion rings ($4.04) and fries ($1.68). Just for grins, I also ordered a small chocolate shake ($3.58).

I took my place at a very worn wood table attached to the wall. There where other threadbare tables and chairs strewn about. A dusty sign leaned precariously in the window next to me proclaiming Best Hamburger 2001, City Search. It seemed a place in decline and my expectations were low.

My name was called and I retrieved my brown plastic tray loaded with grub. Ford’s does not cheat you on quantity. The shake was in a Styrofoam cup. It was very chocolaty with a hint of coffee, and none of the Hershey’s chocolate taste you often find in shakes. I liked it for its uniqueness. 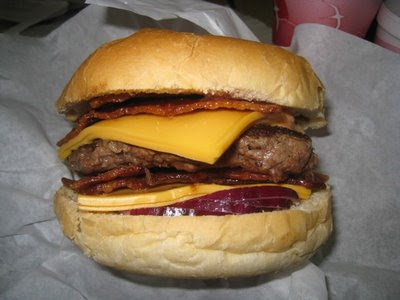 The onion rings were thin and dark, looking a little overcooked. They were hot and crisp and tasted good dunked in the spicy mustard sauce that accompanied them, another unique little touch. Fries were very thin and hot. Also, a little overcooked. I can’t be sure, but they tasted fresh cut, but also tasted a little of old grease.

The burger was a big patty with lots of crisp bacon top and bottom. There were two slices of cheese on the top and two more on the bottom. Also, a tangy Thousand Island sauce graced the top and bottom bun, which was a little crunchy and toasted, but good. The burger was not that hot and the cheese not melted, but the flavor of the burger was really good. Along with a slice of red onion, Ford’s achieved a nice blending of all the flavors. I would like to try this burger piping hot and with the cheese next to the patty instead of having the bacon in between the patty and cheese. 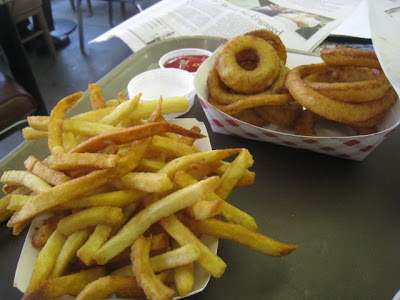 I left and took external shots of the faded signed and worn exterior. Ford’s is a real enigma. A lot of good ideas, executed in a fashion that results in less of an impression than they could have with a little more attention to detail.

Unfortunately Ford's has been closed. If you're ever in Sacramento again you need to check our Skip's Kitchen 4717 El Camino, Carmichael, CA. Great burgere, fries, onion rings with great crunch and bacon-onion marmalade on burgers...delish!