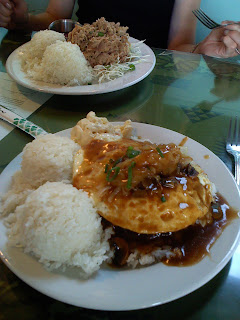 Da Kitchen in Kahului, Maui is a local spot recommended to me by a friend before out recent trip. I was assured it is a great place to get the local flavor, both cultural and of a cuisine nature. She was right.
My wife, daughter and I arrived at the Maui airport just a little after noon, the day before Thanksgiving. By the time we waited for our luggage and got a rental car, we were quite hungry. I had been told that Da Kitchen was behind the Krispy Kreme, near the airport, but I asked the clerk at Avis how to get there. She told me it was across the street from the K Mart in the Triangle Square. It was pretty obvious we were close when we drove between the Krispy Kreme and the K Mart. We found the Triangle Square and there tucked in a strip mall unassumingly was Da Kitchen.
We were greeted warmly by our server and given a booth made of wood and vinyl. Up on the high wall was a big 3-D wave sculpted from fiberglass. If you aren't lucky enough to get a booth, there are outdoor style tables with green plastic chairs in the middle. Very casual.
I wasn't counting on having a burger until I saw the Loco Moco ($8.75). The menu described it as "A Homemade Burger topped with two eggs, gravy, sauteed onions and mushrooms. Please consult your physician prior to consumption." I asked the waitress if this was something only the stupid tourists got, or do the locals eat it. She laughed and said, "Lot's of locals eat it, That's the best thing I've ever heard." How could I resist? Given a choice of "mac" or salad on the side I took the mac. 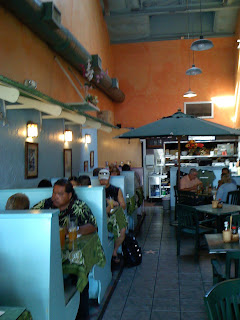 Before long a towering plate of food arrived. Its centerpiece was sitting on a bed of rice. A burger covered in brown gravy, two fried eggs, over easy, sauteed onions and mushrooms. There were also two huge scoops of rice and a dollop of macaroni/potato salad. I cut into Mount Loco and the egg yolk oozed over the whole luscious mess. It reminded me a lot of Salisbury Steak I used to have as a kid. This is a very unusual taste that I liked better with each bite. The gravy was a little too salty for me, or I would have rated it even higher than the 4 spatulas I ended up at at. For sheer audacity and originality it deserves at least a 4.
The Mac was very good too. Creamy and a nice counter balance.
A real coincidence occurred the next day. My wife is reading a book called "The Tenth Muse" by Judith Jones. The author was the book editor for Julia Child. She tells a story of being in Hawaii and trying the Loco Moco. So my server wasn't steering me wrong. It is a local tradition.
Burger 4 spatulas (out of 5)
Mac 4 spatulas
Da Kitchen
425 Koloa St.
Kahului, Maui, Hawaii
Posted by Scott R. Kline at 4:34 PM