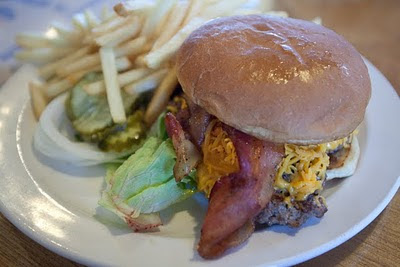 The Powhatan Restaurant in Pocahantas, Illinois, beckoned to us as we sailed along I-70. We had just veered off our Route 66 trip to head toward our final destination in Indiana. A very well-kept scarbine establishment, the Powhatan has tasteful billboards along I-70 along with its sister restaurant the Blue Sky Café, home of the Mile High Pie.

We stopped in at about three in the afternoon, so there were only a couple of farmers seated among the wood tables and booths. Gretchen Wilson stared out in to the restaurant from a signed poster. The Red Necked Woman is a resident of Pocahontas and in fact has a song about just that.

I ordered the Colby and Bacon Burger ($6.95). This is a fabulous burger made just the was my grandma used to make burgers. Fresh ground beef is smashed into a patty on the griddle, resulting in a thick, juicy patty with a crisp outer “crust”. Shredded Colby cheese was melted on top with crisp, salty bacon. The bun toasted bun held the whole thing together. This was not your standard frozen patty cheeseburger. A lot of care and thought went into producing a unique and flavorful product. 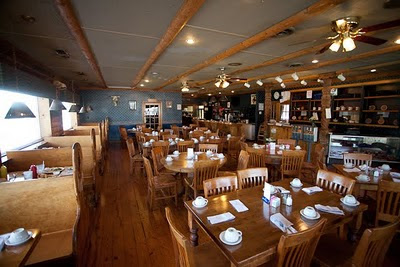 Onion rings were killer as well, thick sweet and battered crisp. The fries were thin, hot and salty.

What a delectable find in the middle of the infinite flatness of middle Illinois. Don’t miss the Powhatan. 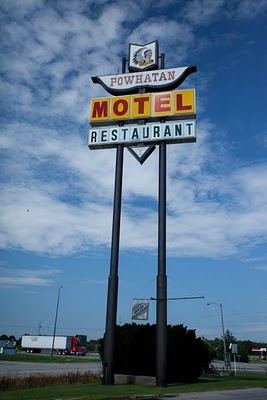