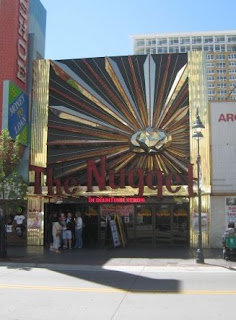 The Nugget Diner in Reno, Nevada represents much of what Reno is all about. From a run down strip near downtown Reno, one enters through the gaudy exterior, which portrays a nugget of gold glistening in the sun. The Metallic rendering of the shining nugget is preserved from an earlier time. After entering the door, you see a seedy bar and rows of slot machines. Nestled in the back under a little red sign that says “Diner”, awaits the Awful-Awful.

The Awful-Awful ($6.00) is a half-pound burger that sits on an onion bun. Called the Awful-Awful because it is awful big and awful good, the burger is indeed an impressive stack when you add in the lettuce, tomato, onion and the Thousand Island-style sauce. The burger sits on top of one pound of fries, seasoned and cut thin. It is rare to find both fries and burgers this good, especially at that price. 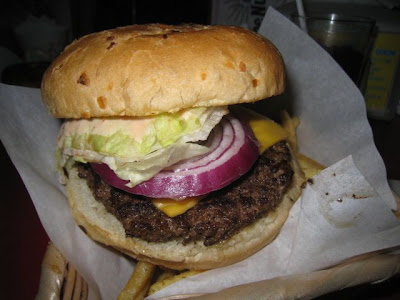 The burgers are griddled and greasy, but in the right way. The meat is seasoned with pepper and has a great flavor. American cheese blends well with the whole stack. The grilled onion bun is fantastic as it holds together the entire production.

We also had onion rings a big basket of massive Maui style beer-battered onion rings. At $6.75 they cost more than the burger and fries. They weren’t up to the high standards of the rest, but the onions were sweet and hot and the batter crunchy.

I realized I hadn’t ordered the shake and got a chocolate shake ($5.25). It was a little too Hershey’s syrup for my taste and not that thick. 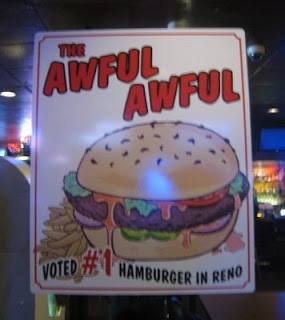 As my friend Bill and I sat at the counter and took in the place, a constant flow of customers ordered their own Awful-Awful burgers. I loved the signs above the counter. “The Famous Nugget Hangover Omelet – a 4 egg omelet stuffed with chili grande and smothered in melted cheese and salsa.” My favorite was “9 out of 10 Vegetarians Don’t Eat Here.” That says it all.

I recently came accross your blog and have been reading along. I thought I would leave my first comment. I dont know what to say except that I have enjoyed reading. Nice blog. I will keep visiting this blog very often.